course! And the best part? Earlier this year, Palibroda and Wanner collaborated with Sunny Fong of VAWK for a surprise showing at opening night of the World MasterCard Fashion Week in Toronto — a big coup with American marathoner Amy Palmiero-Winters in a black sheath dress donning the Alleles fashionable prosthetic covering on the runway.

Interestingly enough, supervisors tried to deter Wanner from further work in prosthetic fashion while completing her master’s thesis in industrial design at the University of Calgary. Apparently frivolity only applies to fully limbed humans when taking sensitivity into consideration. Fortunately, the universe gifted Wanner with a mind of her own, and she went on to win the ACID (Association of Canadian Industrial Designers) Jury Recognition Award in 2012.

“My thesis was nominated to be part of the first National ‘Best of the Best’ Industrial Design students show that was exhibited at Emily Carr University,” says Wanner, whose thesis was selected as one of the winning projects.

Wanner’s thesis, “Empowering by Revealing: A Study in the Hybridity of Prosthetics and Fashion,” has since moved on to inspire the Alleles Digital Rococo collections. The highly ornamental aspect of this work finds its roots in 18th-century Rococo art, blending classical Russian elements with “a little bit of Canadiana” and their Digital Rococo aesthetic. The Digital Rococo patterning is integral to the “architecture” of the company’s design. Palibroda, architect and designer, received the SSEF Excellence in Steel Design Award in 2009, and went on to complete his Masters in Architecture from the University of Calgary in 2011. He focused on new technologies of design and fabrication while in architecture, but because there is little room for experimentation in the field, these skills are better served on smaller scales.

Eventually Palibroda and Wanner intend to apply their artworks on larger and larger scales, but until then the team is happy to fill an emotional and psychological need that has been overlooked and considered taboo. And because there were no options for simple yet intricate and elegant cosmetic coverings for leg prosthetics, they wanted to remove this part of the industry from the medical realm entirely, and inject an element of excitement, sexiness and fun while keeping the prosthetic wearable art accessible and affordable.

“It’s interesting that we don’t actually work on prosthetics, or have anything to do with the ‘functional’ aspects of them,” says Palibroda, “but we are quickly making an impact on the industry.”

Most of the Alleles designs are named after people who have impacted them personally, or have been integral to Alleles in some way. The “Sochi,” for example, was designed for Alleles model Michelle Salt, Canadian Paralympic snowboard competitor in the 2014 Sochi Paralympics. Talk about inspiration compounded. Thanks, Alleles, for injecting a little bit of equanimity into fashion. And thanks, universe, for Alleles.

By Jill Lang inside the 2014 Inspiration issue of NICHE 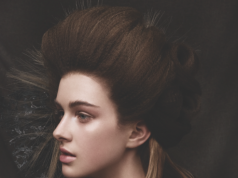