When did children’s bedrooms become an explosion of fairy tale characters and cartoon references? Most adults, men and women, have their own passions and hobbies, yet the thought of decorating an “adult” space with those inspired elements would be completely out of the question. My take on design is always to remain timeless and curate a space for the individual who gets the privilege of enjoying it every day. Still, children’s spaces are, more often than not, being put into a disposable category where designs are short-lived and created for temporary use.

About a year ago we completed a bedroom for my youngest client, 19-month- old Isabelle. Her parents were expecting their second child at that time and decided that in lieu of creating yet another nursery they would give Isabelle her own space, her very own tailored bedroom — one she could grow into instead of out of. That is probably the most important aspect to remember when it comes to decorating for children. Most parents will say that they don’t feel it is a good decision to invest in pieces their children will grow out of, and I couldn’t agree more. Therefore, personalizing your child’s room into one they can use for years to come really becomes the much better financial decision.

My clients wanted a space their daughter could use as not only a toddler, but also a young adult. Well, how do you design for a two-year-old a space that can be used in the next 10 years? Easy, actually. When it came to selecting the finishes we used the same design philosophy and principles we do with shared spaces in the home. We took into consideration her wants now and how her needs would change over time. For instance, our clients knew the next phase was just around the corner: putting their daughter in a “big girl” bed was unavoidable and since we had the space to incorporate a queen-size they opted to purchase now rather than later. The idea of buying anything twice isn’t a financially responsible decision for anywhere else in the home; therefore that impulse shouldn’t be used for kids’ spaces either. Rather, we designed a custom fully upholstered bed, which was soft and comfortable enough for a toddler yet fashionable enough for a growing little lady.

We selected fabrics that felt luxurious to the touch but still had that element of playful ability. My team immediately fell in love with the idea of designing a stylish bedroom with a flirty fuchsia base and sophisticated navy accents while tying it all together with a neutral emphasis on whites and greys. The patterns were carefully chosen to include a natural yet lively element, where accessories could easily be interchanged at any time. That is really the key to investing in timeless design. By keeping a strong foundation, we are able to change the accents as the child’s needs change. We still wanted the room to feel like it belonged to a little diva so we opted to paint the walls a soft rose, one that wouldn’t complete with our strong headboard fabric, yet we painted the ceiling a bright magenta that invited your eyes into a real focal point and a fun design element Isabelle just loved.

Children’s bedrooms are becoming much more than a place to simply sleep in. It is where most will go on their computers, relax, engage with friends and really appreciate, if done well. I encourage parents to think beyond the disposable bedroom sets that they will inevitably throw out. Our viewpoint is to plan well and purchase pieces that can be used for years to come. Our team wanted our littlest client to feel creative every morning and take pride in her fabulous kid’s suite, which really is the secret behind everlasting design.

By Erica Gelman inside the 2014 Inspiration issue of NICHE. 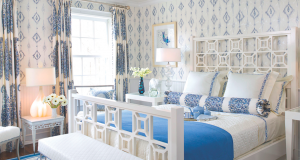 Decorate U – Oh So Blue