Dating back to about 600 AD, in north Northumberland England, is the quaint and charming market village of Alnwick. The character of the village has changed little since its humble beginnings centuries ago. At its heart, majestic and proud as ever, stands Alnwick Castle, which was home to the most powerful northern barons, the Earls of Northumberland.

Today, visitors come from far and wide to explore the castle and its medieval enchantment. The landmark has gained tremendous popularity in the past decade due to its role as the mighty Hogwarts School of Witchcraft and Wizardry in the Harry Potter movie series. Travellers hoping to slip into the wizarding world can stroll across the grounds where Harry learned to fly a broomstick and wander corridors in search of the Gryffindor common room.

The castle has plenty of exhibits and three distinct museums to provide you with a glimpse into the bygone medieval era. There are also numerous interactive events that are great for inspiring the imagination. The Harry Potter devotee can enjoy charmed performances, tours and even broomstick flying classes — and Muggles less curious about magic can participate in historical activities like a Knight Quest or making medieval crafts.

Once you’ve enjoyed the many wonders of the castle, prepare yourself for the atmospheric Alnwick Garden, which is famous in its own right and for good reason. The garden is filled with sub- regions ensuring there is something to dazzle every taste — whether it be the quiet of the Woodland Stroll, the soft shades blooming in the Rose Garden, the danger awaiting in the Poison Garden or the joyful waters dancing down the Grand Cascade, each are magical in their own way. Alnwick Garden has also partnered with celebrity Chef Jamie Oliver, whose food program, Ministry of Food, teaches basic cooking skills, as well as promotes learning about food in an unforgettable environment.

Regardless of what draws you to Alnwick Castle and its glorious sprawling gardens, you are certain to feel a bit of magic in the air. It may just be the history of the grounds, but most likely it’s more than that. And to all of the non-believers, keep an eye open, you might just catch sight of a train arriving from Platform 93⁄4.

By Chelsea Forman inside the Spring 2014 issue of NICHE 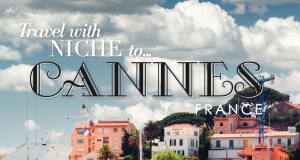 Travel with NICHE to Cannes France