Manhattan derives from the word Manna-hata. Translated as “island of many hills” from the Lenape language. New York City is the pulse of the United States. Its chaos is part of its charm and any faults the city may have are over shadowed by its tremendous successes. It is one of the grandest cities in the world defined by a distinctive combination of uptown glamour and downtown grunge.

There are five major boroughs in the city, namely Brooklyn, The Bronx, Queens, Staten Island and Manhattan. Diversity is really the heart and character of any major city, and

NYC is a delicious melting pot. There are over 26,000 people per square mile, chatting over bagels and schmere in approximately 170 different languages. Overwhelming? You better believe it. Th ow in the sky scrapers that give you vertigo just looking up at, an unrelenting chorus of honking horns, terrible smells, wonderful smells, all of the citizens, an additional few million visitors, fabulous food, eye popping couture, and there you have it — you’re in New York, New York. The one place on earth where the best and worst things intertwine in an inexplicable way to make the extraordinary.

Uncovering a city of such magnitude is best done from the beginning, where New York City was born in the sixteen hundreds, the borough of Manhattan. Manhattan is roughly divided into Downtown, Midtown and Uptown sectors with Fifth Avenue slicing it in half to make the east and west sides. Within each area are several smaller districts, the little pieces to the New York puzzle that make it the spectacular, relentless, sleepless hub that it is.

Downtown or Lower Manhattan is most internationally recognized for Wall Street. But the area has plenty more to offer than that. It is the perfect starting place in the city because it will give you a really wonderful understanding of just how much the city has changed. It’s the colliding of old and new. Young entrepreneurs contemporize the areas and fl od galleries, boutiques and bars, but the district has also hosted a number of the nation’s most notable triumphs, including George Washington’s inauguration on the balcony of Federal Hall. People watching in Battery Park will never disappoint, it will also offer a superb view of the Statue of Liberty. From the park I recommend wandering straight up Broadway. You’re going to hit all of the major sights. When you reach Wall Street you will be amazed by the tranquility of Trinity Church to your left and the mayhem that is essentially the center of the global economy — the New York Stock exchange — to your right.

Toast President Washington over a pint at Fraunces Tavern his favourite drinking spot on Broad and Pearl. The tavern is where revolutionaries plotted the New York Tea Party, merchants founded the New York Chamber of Commerce and Washington notoriously bid farewell to his officers in the late 17 hundreds.

Carry on up Broadway and take a quick shopping detour on Cortlant Street where the famed Century 21 is found. This is the holy grail of discount designer items. Warning Fashionistas: prepare yourself before entering. It can be a traumatic experience if you happen to grab for that discount Prada dress in your size at the same time as someone else with your number (especially if they’re an experienced New Yorker). Once you’ve filled your bags carry on to Fulton Street for some refuelling and an unforgettable Financial District dining experience. Who has time to sit down and eat in New York? Nobody. So, you can grab anything you may be craving from one of the areas street carts. Even if you’re a visitor you will quickly find your buzzing to the New York pace and will have no idea why you are rushing to get your food down.

After a bit of recharging a good day’s end is to pay your respects at Ground Zero. Nothing will adequately prepare you for the site and how truly overwhelming it is emotionally.

On your way uptown be sure to stop in at least one of the villages. There are plenty of spectacular neighbourhoods to hit but Greenwich Village, or simply The Village if you’re feeling New York forward, is in my opinion, Manhattan at its storybook finest. The Village is home to Sarah Jessica Parker’s gorgeous brownstone and several more like it. The streets are clean, lined with trees and filled with quaint shops, restaurants and bakeries. A must try is the Magnolia Bakery on Bleecker Street. Enjoy one of their cupcakes (hands down best in the world) across the street at Bleecker Playground for the best kind of people watching of the celebrity variety (hot spot for SJP, Heidi Klum and many more).

Now will be as good a time as any to get possibly your most intense NYC experience. Let’s grab a metro and shoot deeper into Midtown Manhattan. As you’re sitting on the train crushed between what will feel like a million people of every origin, try not to belt out your favourite Broadway song. It’s really impossible not to as you shoot closer and closer up the pipeline to the heart of NYC.

Plan to spend a few days in Midtown. Headquarters of the United Nations and several of the city’s most impressive buildings, Midtown is the busiest commercial district in the USA and the most severely used piece of real estate in the world. Th s is where you should attempt to hail your fi st cab just for the sake of it. You can count on at least five passing before you get the impatient New York wave down and one fi ally stops.

Shopping alone in Midtown could be a month’s endeavour. A complete day can be spent meandering up Fifth Avenue. Along the way you will be able to see some major sights including Madison Square Garden, the New York Public Library, Rockefeller Center and Radio City Music Hall. Take a quick walk up Forty-Second Avenue and check out Grand Central Station. The Empire State Building will offer you the best look at New York in its entirety — however, if you have even the slightest fear of heights, or elevators for that matter, skip the trip to the top and stick to street side sights.

Parallel streets to Fifth are Park and Seventh. They are each a total New York experience and completely worth further exploration.

I always recommend leaving Times Square to a night time outing. The lights are just beyond what any photo could ever properly depict because they’re so much more than simply a sight — they’re an intoxicating and completely over stimulating experience. Wander the streets and warm up your lungs to sing along to a Broadway show after dinner in the Theatre District.

When you’ve had your fill of Midtown Manhattan you will certainly be ready to slow your pace, Upper Manhattan or Uptown, is the quieter side of the city. Warning: you will be humming Uptown Girl the entire duration of your time here, this will also be your key to picking out other tourists.

Ladies Mile — In the late 1800’s this was what 6th Avenue in Chelsea was called as it was where the who’s who of ladies in town bought their duds. Once where the original Macy’s was located, the mile is now home to a variety of box stores including T.J. Maxx and Old Navy, but is worth a shopping excursion simply for the history.

Macy’s on 34th Street — The world’s most famed department store takes up an entire street block in Midtown Manhattan. Opening in 1902 the department store is still the largest on the planet.

While there are several unique areas to explore in Uptown I recommend the Upper East Side. Th s is the neighbourhood of the seriously rich and not always famous. Stick to upper Park and upper Fifth to get a real good look at how seriously exclusive this part of town is. It’s where there are perfectly groomed doormen, nannies whisking Gucci clad babies to the park, and dogs that are often more perfectly put together than the matrons walking them.

There are several galleries and museums to peruse through but some of the fi est art work is the architecture of the superb historical buildings that many Upper East Sider’s call home. A picnic in Central Park after a carriage ride is really the only way to end a trip to the Upper East Side.

New York is the world’s city. It’s where all sides of the globe collide into one. Regardless of where you are in Manhattan, you will quickly feel the remarkable energy that is the result of the extraordinary diversity of its people… and singing New York, New York will forever be changed into an anthem of tribute to the great city. 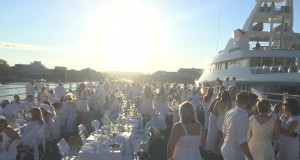