Tapping into a market that was missed, Dolce & Gabbana released a first glance into their new line of high-end hijabs and abayas, head coverings inspired by typical Muslim women’s garb. There is no surprise that this was a project on the go as sales of personal luxury good in the Middle East were up from $6.8 billion in 2014 to $8.7 billion in 2015. Dolce & Gabbana currently operates 13 stores and boutiques in the United Arab Emirates and is tapping into one of their markets that is consisting of loyal customers. This new launch was a smart move by the Italian fashion house as Middle Eastern luxury sales are soaring above U.S. and Europe.

The high-end line of headscarves and floor-length, traditional dresses comes in black and beige, and feature printed daisies, lemons and red roses.

“Brands are finally taking note of what I’ve been advocating since I founded the fashion brand Haute Hijab in 2010 — that Muslims (in this case Muslim women) are a thriving, fully-functioning and But designers should remember that hijabs are not a fashion accessory, Elturk wrote, but rather “a religious garment with deep and profound significance.” 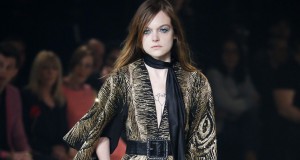 Slimane Brings Glam Grunge and Vintage Vibes for 50 Years of...