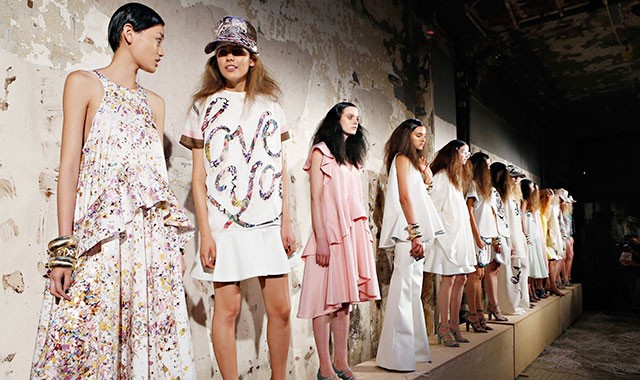 Cynthia Rowley doesn’t disappoint in the department of whimsical, charming designs and neither did her spring fashion show. Straying from a traditional runway presentation, Rowley fused several mediums into a two-hour unveiling. With Prosecco flowing freely and confetti streaming from the above balconies, models were meant to look and feel the essence of a party atmosphere. Throughout dilapidated rooms of an abandoned hotel in Manhattan’s financial district, press, buyers and editors were allowed to roam freely amongst the open spaces, soaking up the mixed media on offer. Models not only swept past guests fashioned in Rowley’s latest creations, but also immersed in photo shoots that were simultaneously projected amongst bare and tarnished walls as installation art for all to relish.

Photographers of varying backgrounds from runway snappers to artistic mavens were invited and engaged to capture some of the best still images of each outfit. Far different than the standard ‘end of runway’ shots, the final product was unique. There is feeling and personality, atmosphere and ambiance pulsing through the photos. Exactly as Rowley anticipated, diverse perspectives were captured of her entire collection.

The clothing encompassed Rowley’s fun, feminine trademarks and flirted wildly with exaggerated silhouettes and frills. Hemlines were wider than usual on A-line dresses, mirroring the ample volume of the models’ hair. Palazzo pants were so flared they were almost unimaginable to the eye and made me reminisce of little girls playing dress-up in their mothers’ closets. Frills layered upon one-another adding dimension to dresses while peplum tops served true to the designer’s history of flirtatious attire. Simple sportswear pieces and t-shirts with overzealous cuffed sleeves and boxy fitted bodies brought a tomboy element to the mix and the pairing brought balance to some of the ladylike elements.

As confetti drifted down from above and gathered along the wooden floors, onlookers understood that not only did it contribute to the uplifting mood but it mimicked one of the main prints seen strewn across entire outfits. With no fear of colour and bold prints, Rowley didn’t shy away from using a healthy dose in this collection. Giant singular paisley prints were asymmetrically placed on garments and through digital printing they divulged a rather surreal appearance, almost evading to the illusion of a fairytale world set directly through the garment. The multi-coloured metallic brocades proved to be one of the most interesting fabrics at fashion week. The fusion of unconventional bright metallic thread was a unique approach to the traditional material and by using the luxurious fabric for simple and slightly sporty styles such as bomber jackets and shorts, the overall look remained young, free, and harmonized with the collection as a whole. A similar juxtaposition was apparent on basic crew neck tees and varsity style shorts that were completely covered with sequins and a few detailed rows of beading along the neck, sleeve and hem lines.

Although Cynthia Rowley lives in NYC, she can’t resist escaping to chase sun and waves around the world, and as an avid surfer she’s an ideal candidate to design neoprene wetsuits and over the years has become extremely successful in that domain. With multiple seams contouring the female form, her wetsuits were groundbreaking for woman’s surf attire and have lead to an ongoing collaboration with major surf brand Roxy. On display in this collection were two variations in plain silver and gold, but Rowley’s uber famous wetsuits that have garnered much attention are packed with colour and prints.

It’s no surprise that one of Rowley’s strongest and most consistent sources of inspiration is Contemporary Art. She doesn’t simply muddle in the art world, she is saturated by its embrace. As part owner of ‘Exhibition A’ with her husband Bill Powers, they are in the business of offering limited edition artwork by top contemporary artists at affordable prices. Her extracurricular activities don’t end there. Rowley can be seen as a judge on HGTV’s ‘Design Star’ and Lifetime’s ‘24 hour Catwalk’ plus she writes columns for ‘Glamour’ magazine and a series of books called ‘Swell’ which lend creative and quirky ideas for hosting parties, decorating and holiday advice. As the owner of 60 boutiques in the USA and Asia, the company is on the rise with annual wholesale revenues upwards of $130 million. It’s a true success story. Rowley built her business on a $3000 loan from her family after attending school at The Art Institute of Boston.

Cynthia Rowley may be a busy mother of two, but she has an overwhelming sense of youth and freedom that is beautiful beyond measure and shines through her creations. Not to mention a cheeky sense of humour, Rowley’s gold bangles that were stacked upon models’ wrists were not just over-sized for aesthetic reasons, they were also functioning mini flasks … and let the party continue! 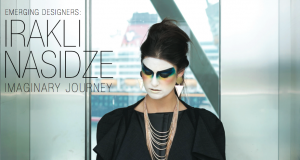