Dale Chihuly is to blown glass what Art Spiegelman is to comics. The medium of glassblowing wouldn’t exist the way it does today without Chihuly, the pivotal figure and go-to historian in the field. Some people ski for fun, but the man who never tires of the possibilities of the blow pipe blows glass. Glasswork is play, and Chihuly is the universe’s play thing. with glass during a weaving class after weaving glass into a tapestry, and a year later he accidentally blew his first glass bauble in a basement with a blow pipe and melted glass. Chihuly says this must have been an act of fate because glass isn’t that easy to blow your first time. I swear I just heard Christopher Walken demand over a loudspeaker, “More Dale Chihuly, please.”

Chihuly liked blowing glass so much that he enrolled in the Harvey Littleton program at the university of Wisconsin. His studies continued at the Rhode Island School of Design, where he went on to establish its glass program and taught for over a decade. In 1968, Chihuly spent nine months working at the Venini glass factory on the island of Murano in Venice, where he quickly adopted a team approach to blowing glass that remains integral to how he works today. Teams range from six people up to eighteen, and Chihuly prides himself in having more than a hundred of America’s top talent at his disposal.

In 1971, Chihuly founded the Pilchuck School of Glass on a tree farm in Washington State and has led the revolution in the fine art of blown glass since. A car accident in London in 1976 left Chihuly unable to blow glass for six months, but it turned out that Chihuly enjoyed delegation and overseeing as much or more than working at the centre of the action. Because the ideas are Chihuly’s in any given Chihuly project, he began to produce sketches to convey ideas to his team. His sketches are an art unto their own and accurately portray his visions, while the finished product is a reflection of Team Chihuly’s talents and skills. Glass can be free blown or mold blown, but Chihuly says glassblowing is a spontaneous medium if you let it be.

Chihuly’s curled glass tentacles grow as spontaneously out of fire and sand as the curly hairs grow out of his head. Chihuly’s work is undeniably Chihuly, like a stamp in the earth wherever he travels. Working primarily with glass, plastic, water and ice on any scale, Chihuly says it is light that makes these materials spring to life. One time a Chihuly water installation of glass spheres dried up with the pond they were decorating. For a moment I thought the spheres sprung to death until it occurred to me that the glass was gone because people took it. Imagine how much those pieces are worth, and how much those people treasure their free Chihuly art.

First and foremost a colourist, Chihuly explores concepts and colour palettes fully. After his mother’s death, he blew through The Black Series, which came to him like any other series, through visions and memories. Like any other concept, he explored it fully. This work is quite possibly an expression of how Chihuly viewed his mother through his art, the black a reflection of his mourning and the emptiness he felt as a result of her passing.

Often inspired by his own art collections, Chihuly has created more than a dozen well-known series of works, starting with the trade blanket Cylinders and the Navajo Baskets in the 1970s. The Baskets evolved into the Seaforms, and the Seaforms evolved into the Persians. The Venetians are totally different, though, and the Chandeliers evolved out of the hair on his head. Other well- known series include Macchia, Niijima Floats and Fiori. Chihuly is also celebrated for magnificent architectural installations, like the Chihuly in the Light of Jerusalem exhibit at the Tower of David, which attracted more than one million visitors. Twelve to fourteen hundred pieces of glass compose many of Chihuly’s sculptural wonders, and installations often take several days to assemble. One can only marvel in the magnitude of works like the Crystal Mountain and Blue Tower in Jerusalem, the Sea of Glass at the Bellagio or Chihuly over Venice.

In 1995, Team Chihuly began to create sculptures at glass factories in Finland, Ireland and Mexico, which were then installed over the canals and piazzas of Venice. If this were my story, I’d call it Installing My Art in Venice: How Cool is that? Many awards and honours have been bestowed upon Chihuly, including eleven doctorate degrees and a prestigious, solo exhibition at Musée des Arts Décoratifs, Palaise due Louvre in Paris. Chihuly glass has been exhibited in hundreds of museums, galleries and hotels worldwide, and homes are certainly not exempt from gleaning more Dale Chihuly.

There’s something so natural and delicate about Chihuly’s work; sometimes it breathes and sometimes it exists in a world of its own. Whatever it is, it makes us happy. Contemplative, yes, but we must be happy in contemplation to attract anything good into life. Perhaps Chihuly’s art is the secret to The Secret… The world doesn’t need more cow bell, no; the world needs more Dale Chihuly! 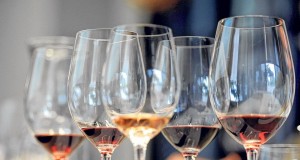 A Taste of the Best Iconic Wines