As one of the most notable collections of the season, designers Thea Bregazzi and Justin Thornton impressed with their habitual de-constructed nature. Although reluctant to follow trends, their signatures fell graciously into this season’s sliced and fused inner-workings. Naturally, their execution applauded and ever so prominent is their philosophy that they dress a variety of women. Transparencies, layering and mixed patterns could play into an overwhelming amalgamation but the Preen duo, who are real life partners as well, own and execute in this domain to pure perfection. The most outstanding quality is that this collection appeals to an array of woman and that’s no easy feat.

Erdem Moralioglu’s fascination with American sci-fi novelist Zenna Henderson fuelled the inertia that unleashed an edge to his ladylike protagonist. In return, his interest built further intrigue in those who often overlooked Erdem’s

collection for it left a far too pretty aftertaste in their palette. Hues of neon sorbet contrast against mud and oil coloured snakeskin, the juxtaposition reflective of Henderson’s alien characters whose crash landing on earth forced attempts to mold to an unfamiliar society. Deceived appearances didn’t end there, Moralioglu combined skins with what appeared to be lace but in actuality the lace was embroidered PVC, and that tongue in cheek was exactly the exploration needed to amplify his following.

Continuing down a path of technical advances, Proenza Schouler ignites with laser cut skins, photo prints and decorative hardware. ‘Randomness’ was a word that inspired designers Lazaro Hernandez and Jack McCollough and evidence stalked their catwalk. Disassembled garments were made whole again through the help of crochet knitters in Madagascar, seen mainly on select perforated leather pieces. Digital photo prints embraced colour and euphoric spring scenes, lain atop a bed of silk satin to create luster and intensify the collection’s uplifting perspective. The addition of coloured studs and metal grommets completed the look of their ideal Proenza girl, so cool it’s fun to imagine who will take a bite.

At Dior, Raf Simons is the man behind one of the most anticipated shows of the season. Since the infamous departure of John Galliano in 2011 due to publicized anti-Semitic remarks, Bill Gaytten who was Head of Studio under Galliano’s rule was immediately appointed to the chair of Creative Director while the house carefully sought their next star. Simons filled those shoes with his debut Couture collection for Fall 2012, and with little to no surprise led the Dior team down a path of success. Through all the frenzy and suspense leading up to Spring 2013, he kept his cool and delivered a refined and exquisitely tailored RTW collection. Although diligent and indulgent towards Dior traditions, Simons demonstrated the potential malleability of the famous fashion house. Satin duchesse gave iridescent volumes to the printed ballroom skirts reminiscent of Dior’s iconic post war ‘New Look’. In sharp contrast to the black, white and grey suiting materials, classic garments were given hints of lightness and diversity with sheer silks contouring structured silhouettes. Bright satins appeared to have electric currents pulsating through, highly reflective of the new spark Simon’s presence has created. By strategically paying homage to prized origins, Simons engineers accordingly to spare sacrificing his personal embodiment of minimalist attire and love for the avant-garde.

Within the territory of new beginnings also lies the inevitable fate that not all good things last forever. After 15 years as Creative Director of Balenciaga, news that Nicolas Ghesquière would be leaving his post rocked the fashion world. As saddened as the news itself, onlookers hope to see Ghesquière at the helm of his own label or re-working another major fashion house as he did so diligently at Balenciaga. The dim realization of a season without his influx of creative superiority left a sour taste in the commentary of fashion’s influential critics. Named Womenswear Designer of the Year by the CFDA in 2001 and with a VHI/Vogue Fashion Award for avant-garde designer of the year under his belt, it’s no surprise Nicolas also gained the title of Time’s 100 Most Influential People in 2005. With an undeniable strength in creating original styles and pioneering recent textile technology, he still managed to hold a high regard for classicism so influential that his career is known and respected globally. As we bid a warm ‘adieu’ to the exemplary designer, we patiently await the day the news comes of his next endeavour. Newly appointed Alexander Wang will fill Ghesquières’ post as well as continue his own line. 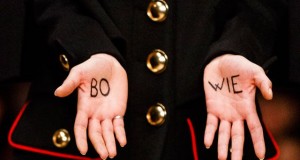