Ok, at one point we all thought of Gin as something your Grandpa and Great-Grandpa drank, or a horrible memory of your worst college hangover. How could it become fashionable and trendy? Well, for a few reasons, it is all of this, and more.

Just as our cultures and palates have become more sophisticated, so has followed what we eat and drink. Unlike vodka, which is supposed to be colourless, odourless and tasteless, gin explodes with character, depth and flavour. And each gin has its own story, ingredients, texture and flavour profile.

Gin is usually distilled from grain, then it is redistilled with botanicals like herbs, spices, classic juniper berries, and sometimes grape flowers — try G’Vine Gin. The juniper berry is dominant in the popular style called London Dry Gin, but now there are so many different profiles that can be subtle, lighter, floral, sexy. New gin tastes include rose, cucumber, vanilla, clove, cinnamon, coriander, orange peel, almond, black current… sounds closer to perfume than a cocktail, eh? past, and they create magical cocktails that rival the sophistication and depth of our modern cuisine. We have really moved past the 1980’s Gin and Tonic and Tom Collins days into the realm of The Negroni (although a classic, sometimes made exquisite by aging in a barrel). And when you are travelling in style to London, England, The New Age Martini Trolley at The Connaught Hotel Bar is an absolute must not miss. It seems that anywhere you are travelling on this planet, there will be a local and interesting cocktail made with gin.

If you are new to experimenting with gin, now is the time to break some out and begin the endless exploration.

Stir over ice in an old fashion glass. Garnish with orange twist.

The first martini James Bond ordered in Casino Royale was the Kina Lillet. Bond’s glassware of choice for the cocktail is a deep Champagne goblet.

Preparation according to Ian Fleming and James Bond:

“Three measures of Gordon’s, one of vodka, half a measure of Kina Lillet. Shake it very well until it’s ice-cold, then add a large thin slice of lemon peel. Got it?”

When martinis were at their most popular, most people had never tried vodka before. A martini consists of gin, dry vermouth and optional bitters.

To Name a Few…

By: Stuart Brown inside Holiday 2013 issue of NICHE 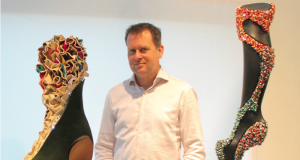