Givenchy Designer, Riccardo Tisci revealed the exciting news on Instagram that the new face of his company would indeed be infamous, Donatella Versace. Tisci states that Donatella herself is his ultimate ICON and she will star as the face of Givenchy’s Fall

2015 campaign. With just a sneak peak of the campaign photo with Versace and Tisci facing away from each other in black and white with a sombre expression, the campaign will undoubtably break the internet with two icons as the face of the renown company. 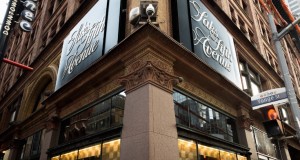